The Genesis of the Clones

After the winding up of the war on NuEarth the Clavell Corporation released their covertly-developed clone program onto the military market.  The clones were an instant success, the mark 2 clone is a battle-proven and effective design.  Clad in the mk4 combat suit the mk2 clone is a highly effective combat unit at a reasonable price. 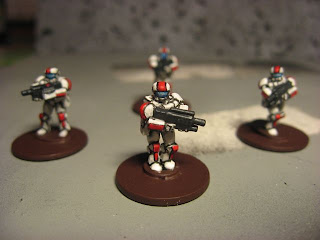 The success of the mk2 clone has spawned imitators, though none so far has proved as effective as the mk2.
Clavell Corps gene-engineers are not idle, a third-generation clone, the F-clones is in development. The F-clone has been observed in action.  All performance analysis has been based on direct observation as no F-clone has been captured alive, or dead.  The F-clone is a leap in development of the mk2 clone, they have been deployed to date as special forces in support of mk2 clones.  Their combat skills are superior to mk2 clones and they appear to be more independent than mk2 clones as they act as leaders for mk2 clone operations. 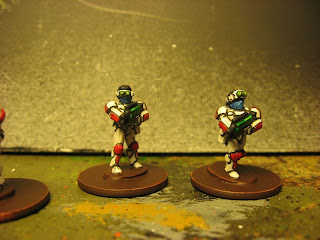 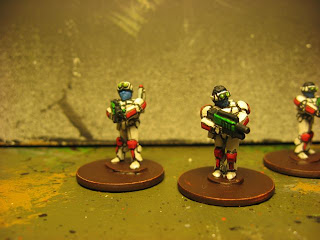 F-clones wear an improved mk4 combat suit and use an improved mk3 clone-rifle.  In thier role as special forces F-clones have access to mission-specific equipment.

Frequently observed in support of F-clones and more recently in support of mk2 clones, is Clavell's new combat drone the 'Little Brother' 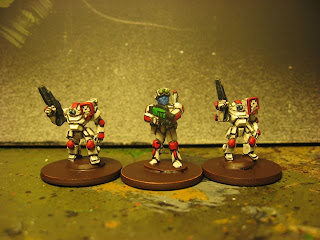 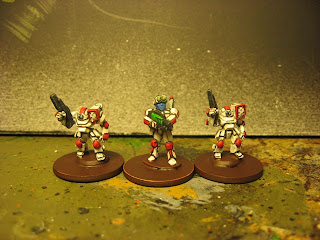 The recently developed 'Guncrab' has not been seen in combat yet. 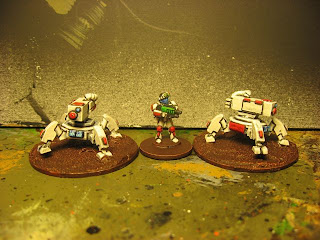 The ramp-up of Clavell Corp's military arm has led to speculation that they intend to launch a contractor/mercenary division to challenge the dominance of units such as Hammer's Slammers.  Analysts consider the clone program a stepping-stone in this direction.

There are rumors of highly secretive black-ops clone.  An R-clone was mentioned in a leaked email,  All existence of such a program has been denied by the Clavell Corp.

The heads on the ArtCrime figs are from GZG, these are more like 1/87 than 1/100, but I like the optics and for characters in suits I can live with the size.  The robots are GZG as are the base of the guncrab, the upper came from the bits box, it is DP9 I think.

Two more pics, in development, a support unit for my clones: 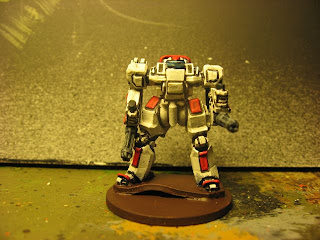 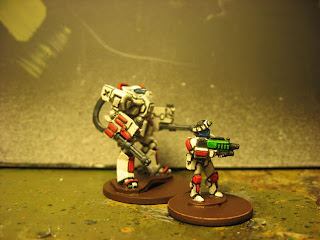 The Valkyrie suit from ArtCrime.